Have you heard me mention volunteering at the banding station and wondered what the heck that is? Well, I’m putting on my bird nerd persona and happily sharing it with you. Picture a huge grin on my face as you read on cause I can’t stop smiling when I talk about my days spent with the birds.

The simple answer for “why band birds?” is that by placing a band on a bird, it now has a numeric code that identifies it from all other birds, in other words it now has an individual identity.

A great example of the importance of birds having an identity is as follows. Say you routinely see a male cardinal at the feeder – is it just one bird that visits or is it four? By giving each male cardinal and identity, it can be determined that it’s actually six different birds that visit the feeder. Now this is an overly simplistic explanation but it demonstrates why it’s important in scientific research why it’s important to be able to tell birds apart.

My Experience at the Station

For eight weeks in the spring and ten weeks in the fall, one day a week I drag myself out of bed one and a half hours before sunrise. The bad thing about spring is the time to get out of bed comes earlier and earlier every week. In the fall, the alarm clock rings later and later as the days grow shorter and shorter, so every week I get to stay in bed for five or ten more minutes.

It should be noted right here; I am not a morning person and I don’t like getting up. Therefore, volunteering with the birds must be pretty darn special for me to drag myself out of a perfectly warm bed, cuddled up with the cat an hour before sunrise every week.

The schedule each day revolves around what time sunrise is. I arrive at the station a half hour before sunrise, 15 minutes before sunrise we head out to open 32 mist nets. These nets are made of very fine threads that are hard to see and contain a series of horizontal pockets called trammels.

Every 30 minutes the nets are checked, birds collected, placed in draw string bags, and marked with a numbered clothespin indicating the net the bird was located in.

At the station, the bags are hung from hooks located in the areas where the banders work. Net picking is my job currently, lots of walking, often in the mud, but I love it.

The bander gently removes the bird from the bag, reads the band number to the scribe, and then attaches the band to the bird’s right leg.

The bander measures the wing chord, tarsus (lower leg), and amount of fat the bird has formed. During migration, birds store the energy they will need to fly long distances in the form of fat which is located in the wishbone area and along their sides.

One important aspect of the research is to identify stop over areas where the birds can forage and replenish their fat stores for the next leg of their migration.

Next the bander identifies the sex (male or female) and determines the age of the bird by looking at the feathers for molt pattern, coloration, and/or condition. In certain species, eye color can help tell if it is a younger or mature bird.

In the fall the bander looks at the top of the skull for complete closure of the skull, just like infants.

The bander finishes by weighing the bird and then releases it. The whole process is done in a matter of minutes.

During the banding process, all the information is recorded by the scribe. I started volunteering as a scribe and learned so much about birds sitting across from the bander. For me, the biggest thing to get use to was the four-letter code system used to identify species, a Black Capped Chickadee = BCCH. Cardinal = NOCA (Northern Cardinal).

I really look forward to my days at the station, run by the Braddock Bay Bird Observatory. It’s so invaluable to my artwork. Watch for a future post on why that is.

Have a great day. 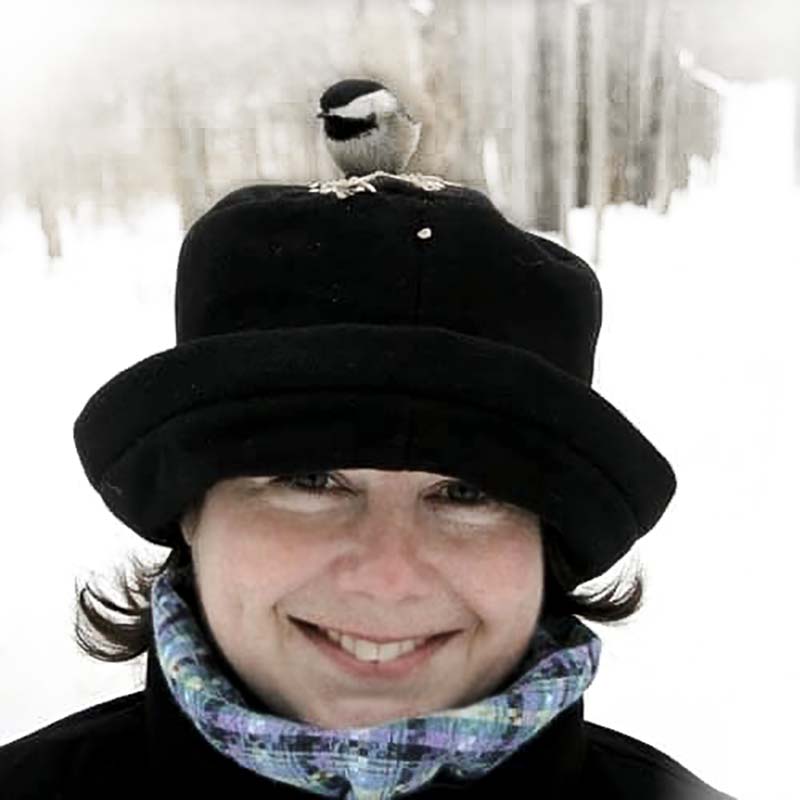 Thanks for stopping by!

I love painting and I love helping people. It’s my hope that by sharing my journey and the knowledge I’ve gained, you’ll be able to shorten your learning curve.

Have a question? Get in touch and I’ll see what I can do.